The need for reliable and accurate people counting technologies for physical businesses is now more critical than ever. In retail, for example, various technological solutions are implemented to ensure that stores’ operations run as smoothly and efficiently as possible. The technology that goes into business operations is vastly versatile and covers every aspect; from security cameras and POS systems to safety alarms and smart locks, you get all of the flexibility you need to analyze your business operations inside and out.

The Importance of Using People Counters

As consumer behavior shifts due to the pandemic, retail stores are looking for ways to optimize their conversion rates. In order to do so, businesses need to gain insights into their visitor data to understand shopping behavior – this is where people counters, or people counting sensors, come into play.

Which People Counting Technology Is Right for Your Business?

While people counters are relatively simple, it can get overwhelming as there are many options out there to choose from. 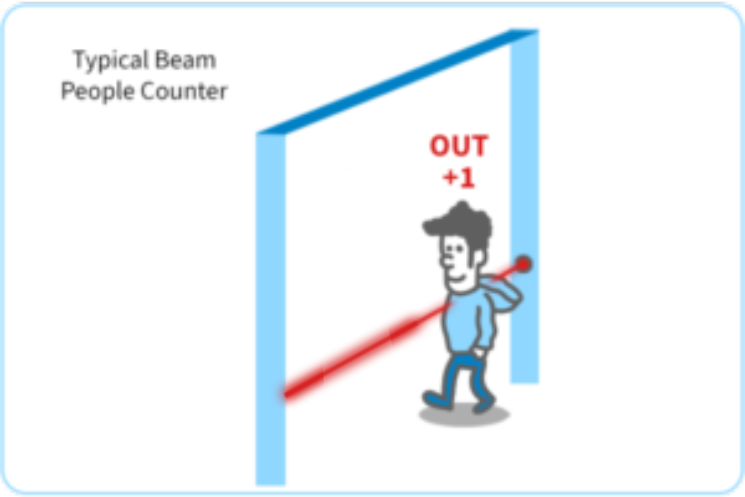 Beam counter sensors – also known as infrared beam counters, infrared footfall counters, or IR people counters – consist of receiver and transmitter units installed side by side at the entrances. When the transmission signal is blocked due to an object obstruction, a count occurs.

Beam sensors have some downsides; For example, they don’t provide in & out numbers separately since they have no sense of direction. Also, beam counter sensors aren’t the most accurate since side-by-side objects are counted as one, and the accuracy decreases as the door width increases.

The verdict: While beam counters are a less expensive option that’s easy to install, the beam range is limited and provides inaccurate results, especially for wider entrances.

CCTV cameras (closed-circuit television cameras) can be used to track people’s movements by connecting the camera to a people counter algorithm that can detect and record how many people pass through the counting zone. Wide entrances and areas are handled by linking several cameras across the ceiling.

CCTV cameras are not designed for people counting solutions, this causes limitations and results in inefficient monitoring and low accuracy. This technology is also affected by object obstructions and tends to give wrong results when there are moving objects like baby carriages or shadows.

The verdict: Since CCTV cameras are not designed to count people, accuracy is low. Multiple cameras are needed to be installed at different angles to cover wider entrances, making the cost for the CCTV option higher. 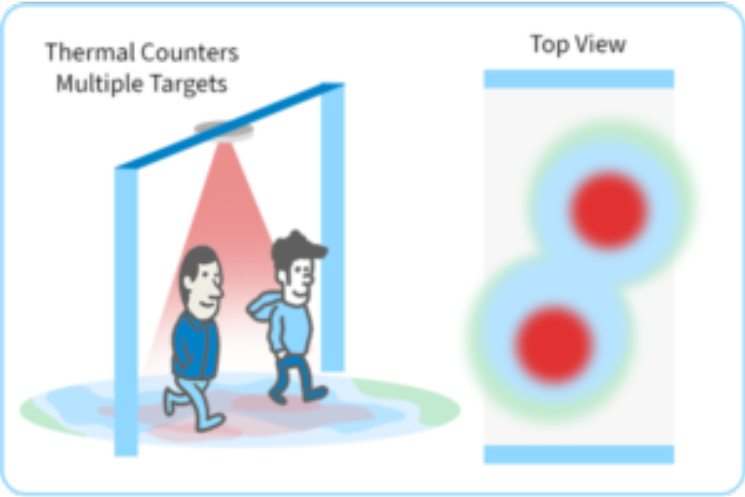 Crowded groups can also decrease the accuracy since thermal counters cannot differentiate between objects due to their temperature signatures.

The verdict: Thermal sensors have low resolution and field of vision, making it harder to distinguish between adults and children, which may affect demographic accuracy. Also, external weather conditions may inhibit sensor accuracy. 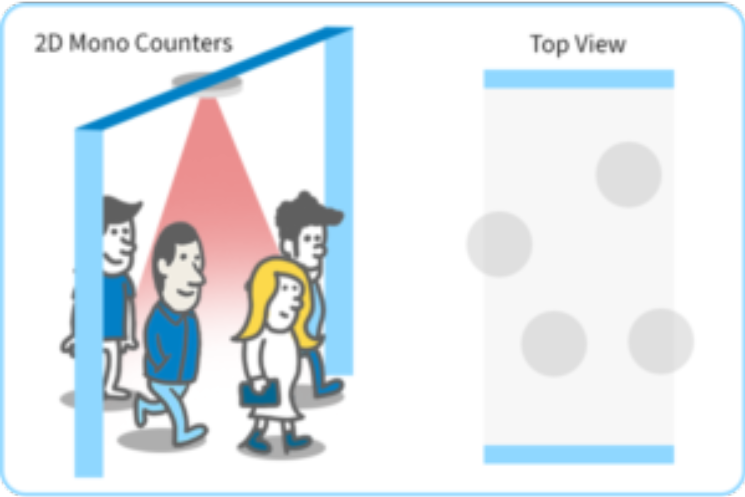 2D Mono counters – or monocular sensors – use a single camera lens for counting. Mono counters are installed top-down to detect moving objects only. The people counting algorithm digitally removes the static background and only tracks the moving objects.

Since mono counters lack vision depth, there is no smart object detection algorithm, and every moving object is counted. Due to this, they only work in low-traffic areas where the lighting is bright and consistent. They are susceptible to count wrong in environments that contain shadow, sunlight, crowded group entrances, baby carts, shopping carts, and children. It has a high field of view.

The verdict: Mono counters are cost-effective and easy to install, but they provide inaccurate data that is dependent on the environment.

Wireless people counters – also known as wifi people counters – vary in size but can be as large as a home router. They work as long as the wifi is enabled and there is access to it, and visitors should have their smartphones on them with the wifi turned on in order to be counted.  This can result in inaccurate results since this sensor type depends on having a wifi access point. Another disadvantage is that wireless counters cannot count groups like families.

The verdict: Wi-Fi counters are best used as a secondary counter and not as a replacement for a primary people counting system. 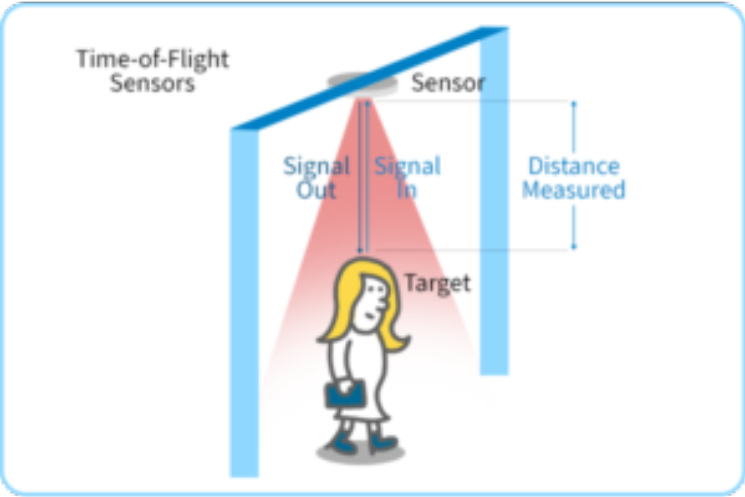 Time-of-Flight counters or ToF sensors are similar in size to thermal cameras. This counting method measures the time difference between a signal’s emission and its return to the sensor.

Time-of-Flight sensors work by sending a signal to objects beneath the sensor, then recording the time needed for the signal to reach its origin, and finally registering a count from the time difference.​​ Several types of signals measure the distance between a sensor and an object: ultrasound, Infrared, and Laser signals.

Since sunlight radiates the whole spectrum, it can significantly disrupt the processed signal. ToF sensors are known to provide wrong information due to the signal quality that decreases as the distance between the object and the sensor increases.

The resolution of this sensor technology is low, thus providing a low level of accuracy when it comes to counting objects.

In crowded entrances, performance can be poor compared to other technologies as ToF sensors may not efficiently differentiate objects from visitors or adults from children. Time-of-Flight sensors can work in total darkness but require multiple sensors to cover a wider area, increasing the overall cost.

The verdict: The data provided by time-of-flight sensors can be inaccurate. Additionally, the need for multiple sensors to cover a wider area makes this sensor technology a more expensive option.

3D people counters use 3D Stereo Vision technology to detect and count people. 3D Stereo vision can be defined as the extraction of 3-dimensional information from images.

An analogy can be made between human vision and computer vision. In computer stereo vision, receptor units are cameras as opposed to human eyes. The same process applies: Two cameras capture two separate images. They are processed simultaneously and combined into one image to provide spatial depth information.

Stereo people counters are installed top-down at any entry and exit points. 3D Stereo counters have vision depth, which allows the cameras to exclude objects that don’t meet the height requirements specified during the calibration process. The overall accuracy of stereo counters can vary from one system to another.

Stereo vision technology is not affected by radiating sunlight, shadows, or other environmental elements as previous people counting sensor technologies.

Active stereo vision mimics human vision similar to stereo vision. However, its enhanced module projects onto the monitored area to generate depth information in no light conditions. That way, it utilizes the 3d stereo vision benefits even when there is no light in the environment.

3D active stereo vision technology processes the combined images and creates depth maps to provide accurate and reliable counting. Sensors are installed on the ceiling to monitor the entrance of the location.

In this example, we can see a sample location entrance with 3-dimensional depth information in no light conditions. The heads of the visitors are marked with a red circle. The algorithm tracks this circle. Counting occurs whenever it coincides with imaginary lines that are configured by V-Count support personnel.

Since objects are differentiated by their heights, objects located side by side can be counted correctly. This technology has a high field of view to cover the entire area, thus decreasing the customer’s total cost.

Ultima AI is the next-generation people counting sensor. The AI utilizes object detection algorithms to increase counting performance and offer an unmatched accuracy of up to 99.9%. It uses the most advanced 3D active stereo vision technology with an HD resolution of up to 1280 x 720 active stereo depth.

Additionally, it offers state-of-art features like auto-calibration, night vision, an outstanding wide field of view, and many more.

Let’s increase your revenue together.

Don't miss any news about visitor analytics and how we are paving the way for a better world!